The researchers found that the most common emotions trigger strong bodily sensations, and the bodily maps of these sensations were topographically different for different emotions. The sensation patterns were, however, consistent across different West European and East Asian cultures, highlighting that emotions and their corresponding bodily sensation patterns have a biological basis. Emotions adjust not only our mental, but also our bodily states. This way the prepare us to react swiftly to the dangers, but also to the opportunities such as pleasurable social interactions present in the environment. Awareness of the corresponding bodily changes may subsequently trigger the conscious emotional sensations, such as the feeling of happiness, tells assistant professor Lauri Nummenmaa from Aalto University. 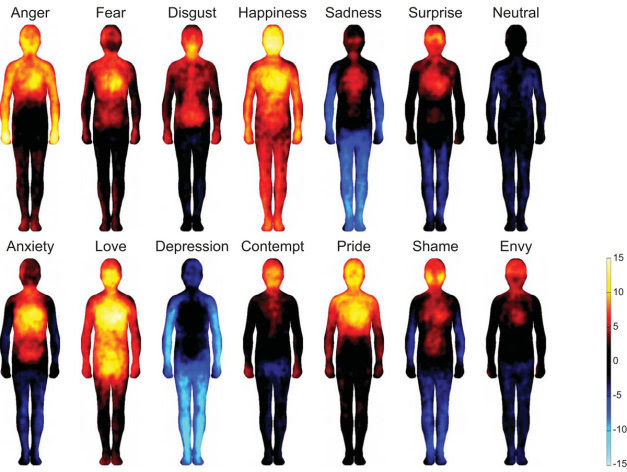 People who carry high-risk genetic variants for schizophrenia and autism have impairments reminiscent of disorders such as dyslexia, even when they do not yet have a mental illness, a new study has found. The findings offer a window into the brain changes that precede severe mental illness and hold promise for early intervention and even prevention, researchers say. Rare genetic alterations called copy number variants (CNVs), in which certain segments of the genome have an abnormal number of copies, play an important part in psychiatric disorders: Individuals who carry certain CNVs have a several-fold increased risk of developing schizophrenia or autism.

FDA is warning that methylphenidate products (Including Concerta, Daytrana, Focalin/Focalin XR, Metadate CD/Metadate ER, Methylin/Methylin ER, Quillivant XR, Ritalin/Ritalin LA/Ritalin SR), one type of stimulant drug used to treat attention deficit hyperactivity disorder (ADHD), may in rare instances cause prolonged and sometimes painful erections known as priapism. Based on a recent review of methylphenidate products, FDA updated drug labels and patient Medication Guides to include information about the rare but serious risk of priapism. If not treated right away, priapism can lead to permanent damage to the penis. Priapism can occur in males of any age and happens when blood in the penis becomes trapped, leading to an abnormally long-lasting and sometimes painful erection. Another ADHD drug, Strattera (atomoxetine), has also been associated with priapism in children, teens, and adults. Priapism appears to be more common in patients taking atomoxetine than in those taking methylphenidate products; however, because of limitations in available information, FDA does not know how often priapism occurs in patients taking either type of product.

Study objectives
To investigate whether total sleep deprivation (TSD) affects circulating concentrations of neuron-specific enolase (NSE) and S100 calcium binding protein B (S-100B) in humans. These factors are usually found in the cytoplasm of neurons and glia cells. Increasing concentrations of these factors in blood may be therefore indicative for either neuronal damage, impaired blood brain barrier function, or both.

Design
Subjects participated in two conditions (including either 8-h of nocturnal sleep (2230-0630) or TSD). Fasting blood samples were drawn before and after sleep interventions (1930 and 0730, respectively).

Results
TSD increased morning serum levels of NSE (P=0.002) and S-100B (P=0.02) by approximately 20%, compared with values obtained after a night of sleep. In contrast, the ratio of AB peptides 1-42 to 1-40 did not differ between the sleep interventions.
Conclusions
Future studies in which both serum and cerebrospinal fluid are sampled after sleep loss should elucidate whether the increase in serum NSE and S-100B is primarily caused by neuronal damage, impaired blood brain barrier function, or is just a consequence of increased gene expression in non-neuronal cells, such as leukocytes.

Importance
Neurochemical studies in human aggression point to a modulatory role for a variety of central neurotransmitters. Some of these neurotransmitters play an inhibitory role, while others play a facilitatory role modulating aggression. Preclinical studies suggest a facilitatory role for inflammatory markers in aggression. Despite this, to our knowledge, no studies of aggression and inflammatory markers have been reported in psychiatric patients or in individuals with recurrent, problematic, impulsive aggressive behavior.
Objective
To test the hypothesis that plasma inflammatory markers will correlate directly with aggression and will be elevated in individuals with recurrent, problematic, impulsive aggressive behavior.
Design, Setting, and Participants
Case-control study in a clinical research program in impulsive aggressive behavior at an academic medical center. Participants were physically healthy individuals with intermittent explosive disorder (n = 69), nonaggressive individuals with Axis I and/or II disorders (n = 61), and nonaggressive individuals without history of an Axis I or II disorder (n = 67).
Main Outcomes and Measures
Plasma levels of C-reactive protein and interleukin 6 were examined in the context of measures of aggression and impulsivity and as a function of intermittent explosive disorder.
Results
Both plasma C-reactive protein and interleukin 6 levels were significantly higher in participants with intermittent explosive disorder compared with psychiatric or normal controls. In addition, both inflammatory markers were directly correlated with a composite measure of aggression and, more specifically, with measures reflecting history of actual aggressive behavior in all participants.
Conclusions and Relevance
These data suggest a direct relationship between plasma inflammatory processes and aggression in humans. This finding adds to the complex picture of the central neuromodulatory role of aggression in humans.


Serum Brain-Derived Neurotrophic Factor and the Risk for Dementia

Importance
In animal studies, brain-derived neurotrophic factor (BDNF) has been shown to impact neuronal survival and function and improve synaptic plasticity and long-term memory. Circulating BDNF levels increase with physical activity and caloric restriction, thus BDNF may mediate some of the observed associations between lifestyle and the risk for dementia. Some prior studies showed lower circulating BDNF in persons with Alzheimer disease (AD) compared with control participants; however, it remains uncertain whether reduced levels precede dementia onset.
Objective
To examine whether higher serum BDNF levels in cognitively healthy adults protect against the future risk for dementia and AD and to identify potential modifiers of this association.
Design, Setting, and Participants
Framingham Study original and offspring participants were followed up from 1992 and 1998, respectively, for up to 10 years. We used Cox models to relate BDNF levels to the risk for dementia and AD and adjusted for potential confounders. We also ran sensitivity analyses stratified by sex, age, and education, as well as related BDNF genetic variants to AD risk. This community-based, prospective cohort study involved 2131 dementia-free participants aged 60 years and older (mean [SD] age, 72 [7] years; 56% women).
Main Outcomes and Measures
Ten-year incidence of dementia and AD.
Results
During follow-up, 140 participants developed dementia, 117 of whom had AD. Controlling for age and sex, each standard-deviation increment in BDNF was associated with a 33% lower risk for dementia and AD (P = .006 and P = .01, respectively) and these associations persisted after additional adjustments. Compared with the bottom quintile, BDNF levels in the top quintile were associated with less than half the risk for dementia and AD (hazard ratio, 0.49; 95% CI, 0.28-0.85; P = .01; and hazard ratio, 0.46; 95% CI, 0.24-0.86; P = .02, respectively). These associations were apparent only among women, persons aged 80 years and older, and those with college degrees (hazard ratios for AD: 0.65, [95% CI, 0.50-0.85], P = .001; 0.63 [95% CI, 0.47-0.85], P = .002; and 0.27 [95% CI, 0.11-0.65], P = .003, respectively). Brain-derived neurotrophic factor genetic variants were not associated with AD risk.
Conclusions and Relevance
Higher serum BDNF levels may protect against future occurrence of dementia and AD. Our findings suggest a role for BDNF in the biology and possibly in the prevention of dementia and AD, especially in select subgroups of women and older and more highly educated persons.


Join us on LinkedIn: Neuropsychopharmacology and Neuroscience Group